skip to main | skip to sidebar

What is this "normal" you speak of? 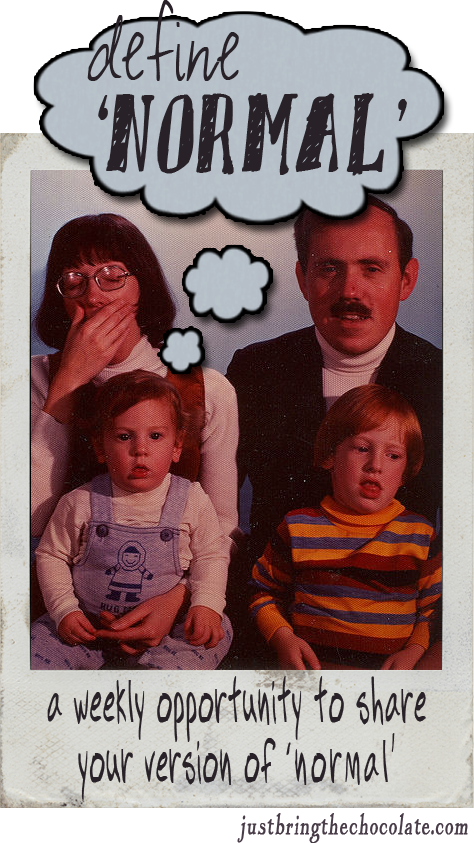 So this post is part of the above blog hop, discussing what your "normal" is- it was primarily designed by Renata for parents of children who don't quite fit society's definition of normal, but having read so many of the blogs, so much of it rang true in my world, so I'm sharing mine.

I have never been normal, even before my medical problems really reared their heads. Nobody is normal, it's impossible to be normal, it's a statistical anomaly within a spectrum that includes everyone and their quirks and eccentricities.

I wouldn't want to be normal, I may have an unusual life, but I am happy, and living to the best of my abilities, and according to many people seem to do more than most people.

Normal for me means getting up at 6.30, just to do medication, otherwise I can't fit it all in, as there's 7/8 sessions a day mostly because of the complicated rules surrounding some of them. Medication takes up a good 2/3 hours a day as it all has to go down my surgical jejunostomy, and there's 34 medications I take daily, many multiple times a day. I don't even want to think about how many tablets that would actually equate to. It ranges from liquids, tablets to crush, capsules to open, tablets to dissolve, 2 to chew on (never sure it actually works, but no other real way around it), tapes to stick on, nasal sprays, eye drops, injections, and creams. I cover most of the routes for meds other than PR and IV, which I'm really rather happy about :)

I have carers that come in 4 times a day, and do the basic tasks of helping me get dressed, washed, get my feed set up, and then domestic tasks like ironing, sweeping the floor etc...

I have legs, but they're generally not very cooperative so I spend my days in my electric wheelchair as my hands are a bit on the dubious side. Even when my legs are a bit better, my autonomic system doesn't work properly so I can't really stand up without getting very light headed, with palpitations and other fun stuff.

I'm attached to my jejunostomy feed for 23 hours a day (I get an hour off to get in the bath [bath lift and carer aided] ), I need a lot of fluid because of my height and weight so there's no real other option. I can drink a bit, but mostly end up throwing it back up, so there's no possibility of relying on that. I'm blessed in that I can still eat small amounts, well I can eat whatever I want really it just has 'interesting' consequences, I was trying to explain my stomach problems to someone one day, and went with "well I like food, it just doesn't like me". I tend to projectile vomit eventually- the ability to swallow whatever you're trying to throw up because you're not somewhere suitable, is quite a trick, not sure I can put it on my CV though ;)

My life is split between what the medical world and outsiders think I should be doing and how I should be, and the mischief I actually get up to. Depending on what needs doing it's either hospital appt, GP appt, uni work, shopping, volunteering, gym or rowing. Yes, you did read the last two right, I spend one day a week on the river training as a rower, something I want to pursue as far as my body and talent will allow, and about 5 other days at the gym either doing weights, cardio or classes. It's not easy, and it's taken me a long time to get to this stage, and there are many set backs and it's all had to be adapted for me.

I try not to be tied to the house because of my meds- I'm lucky in that because of my chair, I already have a handy rucksack that I can drop my pump into, and then my bag of drugs (there's only enough for the next round, or maybe two as I run out of space!!).

It's really hard trying to think about what is normal for me, things that others look a bit bizarre at me for, I guess it ranges from the simple like an adapted keyboard and mouse, right through to wheelchairs, bath lifts, feeding tubes, and most things in between.

I remember someone asking me "How I cope with life?" I wasn't entirely sure what they meant by that, and I'm still not. I cope with life, by getting on with, counting my blessings, and planning my next adventure. I know I'm incredibly lucky, there are plenty out there who would dream of having my life, and it's one I'm pretty content with as these things go.

I also recently ended up trying to convince a paramedic I was in as much pain as I was complaining to be in, despite the fact I looked perfectly calm. If I reacted to the amount of pain I am in 24/7 I'd never do anything other than cry and curl up in bed, so I've learnt to cope with it, by carrying on regardless. It was only when another paramedic dislocated my thumb, I popped it back in, and mentioned it casually in passing, that she finally grasped what I was telling her. Battling with the medical profession is something I do most days. On a good day it's just a simple phone call to arrange an appointment, or check some details, other times it involves writing to your surgeon, complaint letters, chasing up paperwork, working out why someone has changed your feed order (again).

People have often told me that having health problems, is a full time job, and it can be, but it isn't without it's rewards. I have made some amazing friends through support groups and friends of friends with similar health problems (or used to, until I was re-diagnosed), but again, that's unconventional. Most of my contact with my friends is via phone, text, skype, email, Facebook etc...

I hold down many volunteer jobs, I'm doing an MSc; which is dragging on, I had two years out because I was spending too much time in hospital, but should be finished this academic year- although I've been saying that for years, oops!! Then of course there's the rowing, and to confuse matters further I want to re train and be a doctor. Many of these things I wouldn't have done had I not come down this path with my health, so I am grateful for that.

I think that covers normality for me, recently a surgeon described my thumb as "grossly abnormal" and I wonder if that's actually what outsiders consider my whole life to be. I love my life, it's amazing, unique and fulfilling what more could anyone ask for?

I think I've written quite enough, plus my carer has just shown up, so I better go and get sorted for my bath.
Posted by Slightly wonky at 18:03